What’s in a name?

In my recent interview on The Conservative Pagan show on PaganRadio.net the issues of the terms New Ager vs. Pagan was brought up.  And for whatever reason we have this whole group of terms for a large spiritual movement that includes such titles as:

I even found a web page for Jewish Wiccans…who knew?

And it doesn’t necessarily have to be.  As all of these groups have some core beliefs.

We agree on personal responsibility and connection to God (or whatever term we’re using).

We all believe in some kind of single God to which all religions are directed toward.  (Or almost all, there are some belief systems out there that are insulting to human nature with every precept they have).

We all believe in an interconnectedness of existence.  Some focus on how it manifests in nature, some in society, some in the individual, but I think we all agree that all life at all levels is connected—that where I end and you begin isn’t as obvious as the material world would make it appear.

We agree that while we have our individual beliefs, and while other religions have their beliefs, no set of beliefs is perfect that we are all heading to some divine truth.  And I think this is what defines us best, while we all have our own way of communicating with the divine, we would agree that’s a personal issue.  We would never tell a Christian that Christianity will never lead to God; it’s just not going to work for us in this life time.  Hinduism can easily let someone become one with the eternal, but it is not the path that is for me right now.  And while Eastern beliefs might agree with us that all paths can lead to God, I have to say until you get to the upper levels of Lamas and rishis there is still a certain pretentiousness in Eastern beliefs that add, “but my religion is the best way to reach God.”  I think what unites the New Age/Pagan/Wiccan/Pick the term of your choice group the most is that most of us simply argue that this path is best for me in this life time, it by no means is necessarily the best path for everyone.  At most all we ask is that everyone ask themselves if the path they are on is the right one for them, other than that we’re usually (there are always exceptions) not that pushy or tied to our belief as superior to others.

Yet that really doesn’t seem to unite us all that much.

And it gets worse when you have a person who identifies with one term and gets offended when you refer to them by another.  Pagans hate being called New Agers because they think it means they’re a bunch of ditzy hippies who don’t have any depth to their beliefs.  New Agers dislike being called Pagan because they don’t reject a lot of Christian beliefs, as the term Pagan suggest, they simply believe it’s been misinterpreted.  People who just know they’re spiritual but don’t want to be called Wiccans because that is a very specific belief system.  It’s almost enough to make you think we were all different religions and had nothing to do with one another.

But try this.  Read that paragraph but substitute in the words Lutheran, Catholic and Jehovah’s Witness.  It still more or less would makes sense.  And despite the massive gulf in belief they all have a nice overarching term: Christianity.   And that’s kind of the problem we don’t have an overarching term.

Now I go with New Ager more often than not (I also use Pagan from time to time when I’m feeling lazy because I think people have a better understanding of the term Pagan, describing the term New Age can be difficult, as shown here and here) for a few reasons.  The first is I have some problems with Pagan because whenever I use it the English teacher in me screams at the rest of me that it’s a Christian term meant to describe anyone who isn’t part of the Judeo-Christian heritage and technically encompasses Buddhists, Hindus, Sikhs, Zoroastrians, Greek mythology, and a whole host of other beliefs.  The correct use of the word merely means non-Christian…or believing in multiple gods.  And one thing I do know about all of these groups that I’m a part of is that we are monotheists—we may believe that God wears many different masks at many times, and we have a whole mess of ascended masters and angels we call upon for help,  but we do believe in one single divine source.  I don’t use Wiccan because that a very, very specific branch of this belief I belong to, with very specific rituals and custom…that I don’t practice.  I generally go with New Age because I do believe we are on the cusp of a major transition in human history…and, sad to say, because it appears easiest catch all term when you look at any store (especially book stores) the section is called New Age.  But while I don’t have a problem with the term, I understand why others do.  Earth based religions also seem to me to be a limited way of looking at it, as the interconnectedness that the name suggests I believe goes far beyond the mere physical manifestation of this planet and its environment.

So the fact is that we need a new term.  A catch all phrase that separates us from the other main spiritual groups of the world, but still lets us have our denominations under that banner heading.

I have no ideas…but I’m open to suggestions. 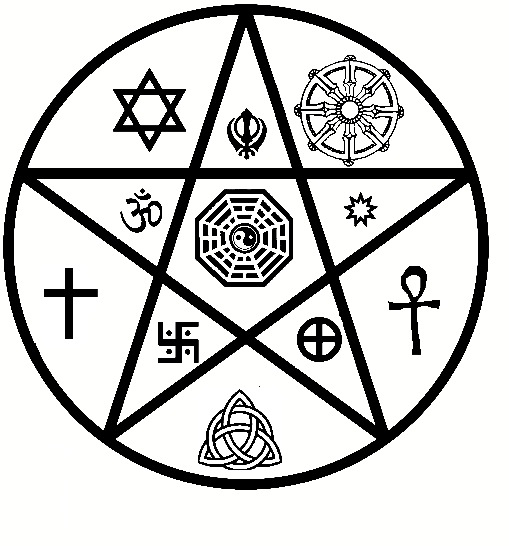 I've always liked this as it represent what I find to be a key tenet of New Age belief, the idea that all religions have truth in them. And before anyone complains, that's a Jain/Hindu/Buddhist symbol in the lower lefthand part.