Education Savings Accounts and the Future of School Choice

“School choice is a catalyst for improvement in the public schools.”–Clint Bolick,V.P. for Litigation at the Goldwater Institute

Last week I attended the Phoenix School Choice Agenda put on by the Franklin Center for Government & Pub lic Integrity.

The speakers discussed several aspects of school choice at the national level and how they are affecting the Arizona education landscape in particular.

Now while I get the objective to the overall benefits of school choice, and there are many, I think we should focus on what the biggest new thing in school choice is: Education (or Empowerment) Savings Accounts (ESA).

I am not being hyperbolic when I say that ESA’s are probably the mechanism which, we have all been looking for to get us far, far closer to money following students and allowing complete choice in education.

So what is an ESA?

Well let’s first go over some previous versions of school choice. Originally you had public and private school and if you couldn’t afford private school or afford to move to a nicer school district you were pretty much out of options (except for a few limited home schooling options). Then 25 years ago we had the beginning of charter schools (and the end of government and union monopoly…and they knew it which is why they have been fighting it every step of the way) as the first major addition to the system of choices. Now schools that were publicly funded and still had to accept everyone but could operate outside the bureaucratic nightmare that created the mess were there for parents who cared about their child’s education. And this caused some positive reaction by the public schools not just pushing magnet schools to keep students, but research has shown that the threat of losing students has caused public schools to improve their own practices which benefits the students who are not leaving for charters and magnets. Along with this you’ve had the push in the last few years for voucher programs which allow parents to have the state pay for privates schools to create even more choice in education which creates more competition and even better results overall.
But it is out of these voucher programs that the ESA’s grew. A few states had to scrap their voucher programs because their state constitutions were very clear about not funding religious schools…but while the state could not give a voucher to the school of a parent’s choice, they could give money to the parent with restrictions that the money must be spent on their child’s education, and then the parent was free as an independent contractor to spend that money on whatever they wanted, even a religious private school. This money given to the parents is the Education Savings Account. But what makes this better than just a voucher is that the money does not have to go solely to tuition. It can be spent on tutors, books, computers if your choice is to send a child to an online school, supplies for homeschooling, online programs…rather than giving parents choices of which school to send their child the field is now even wider that the parents can choose the best path for their child and not just pick from a limited list of schools!

Currently the ESA program is only active in two states, my home state of Arizona is one of them. Currently only specific students in particular subsets (students with a disability, students going to a D or F rated school, etc )  qualify for the program. If an ESA is approved the state will give 90% of what they would have given to the school now to the parent to use towards their 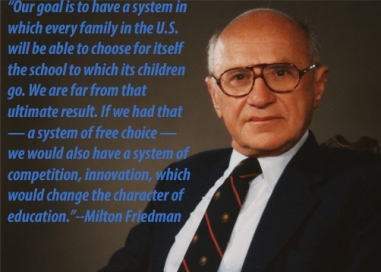 child’s education..thus there is no financial loss to the school as the student no longer goes to school (the schools might complain about getting less money but from a normal business perspective you have to consider they aren’t educating that student anymore…no business would consider selling one less unit a loss…and if enough student leave that it hurts the bottom line, that school was doing very badly), nor is there a loss to the state fund as a student with an ESA is actually 10% cheaper.

The opportunities provided by these allow parents to escape failing schools to schools that meet their needs, but to also fund additional help through private tutors or purchasing the resources a student may need. And with the wider options than simply a voucher for tuition this will allow for more innovation and creativity in the resources offered to students.

Now this is still not having the money following the student in all cases to all places (the ultimate goal of the school choice movement) but when you think about it this is a major leap towards that goal.

As I said these are only in Arizona and Florida, but if you’re looking for a state issue to get behind, this issue probably more than any other issue facing the states (because the unions are in the hands of the courts, the brouhaha over standardized tests is just too crazy right now to have any sensible conversation) instead of the madness that are federal issues, this is the issue to work on. The more students that we can get money to follow the student the more we will the the best options for choice and this is one of the best inventions in school choice in years.